A Cinema of Clutter 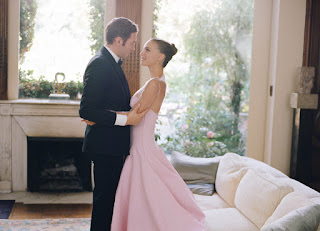 Natalie Portman for Miss Dior Chérie, nothing out of place.

I stopped writing here for a long time, for a few reasons. For a while, I was writing about movies on a different site, but even there it wasn’t at the rate I was cracking articles out here. The truth is, I pretty much lost interest in upcoming movies. I still haven’t quite got the passion back, but I’m trying. It feels like film has drifted from what it can and should be. The decline of the midbudget film is complete. Basically, if you want to see a thoughtfully written film for adults starring some big actors, you’d better get a time machine and turn on a television six years ago. But what’s worse is that even of the few modest films that make it out of the studio gauntlet, the majority feel empty. Literally.

In 2016 cinema, where the hell was the clutter? In this era of empty One.Perfect.Shot. symmetry, a messy room is the most under-appreciated tool in a filmmaker’s arsenal. If a narrative film is a presentation of a life and how it’s lived, the contemporary obsession with clean stark canvases reduces that life to nothing. How can you know anything about a person without seeing them surrounded by personal objects with meaning and value to them?

To prove my point, I’m going to pick on a film I sort of liked based on a short story I loved: Arrival. I came out of Arrival knowing virtually nothing about its protagonists — and consequentially feeling virtually nothing for them — despite the fact that I had spent 2 hours watching them, and one even intimately narrated the damn thing. Their lives were never on screen! In terms of movie romances, theirs had far less of an effect on me than, say, Chief and Mrs. Brody in Jaws, with whom we spend maybe 1/10th as much time.

But every room in Jaws speaks. The spaces are pregnant with as much meaning as the people. What kind of food they eat, what color their walls are, what furniture they have and where it is — stuff like this isn't in the film to fill space but to describe space, to tell us about Amity and the people within. These details help tell the story. The economic, cultural, ethnic, social, and personal lives of the characters are all around them, all the time. This is one of the purest edges film has over a medium like, say, the novel, in which all of that would have to be described or at least implied. In a film you can essentially run a showreel of a character’s life around them while the story runs. Most of the time, most of this stuff will never be noticed consciously, but it doesn’t matter because the accumulated whole is not just a story, but as much the story as the shark is.

Spielberg has always been a genius with this kind of thing. Just look at the Neary home in Close Encounters, probably his masterpiece of set design-as-story. The cluttered human warmth, the sense of tripping over something at every step, is what makes the vast emptiness of the alien space feel so unusual. Think how flat the ending of that film would be if the entire film looked like the last thirty minutes. Instead, because of the work Spielberg and his team spent creating a realistic human space (incidentally, check out the foreshadowing in that painting over the piano), the featureless space of the aliens is a coherent visual alternative, a separate path from Roy's life with his family.

By contrast, with the exception of a single office, all of the empty desks and empty lakehouse in Arrival forfeit any personalized visual storytelling and put the film at an immediate disadvantage in terms of emotional connection. Who can believe a romance happening in empty space, in nowhere. In fact, the thoughtless beauty of the sets actively work against the film at times, since the lifestyle of the surroundings run in a counter-current to the lifestyle of the characters. I mean, honestly, who’s ever seen an academic with so few books? Her human grief plays out in a set that reads like a Bond villain's lair, or a perfume commercial.

It’s filmmaking for hanging on the walls, not living and breathing in, and it’s especially bad now in science fiction filmmaking (Ex Machina springs immediately to mind as another example), where the occasional inability to use existing locations often makes for a cinema of vast empty interiors. This attention to the texture of life is the primary visual difference between, say, Queen of Blood and Alien. Both are fine films, but only in Alien, with its taped notes and physics toys and pornography on the walls, do you have the sense that you are watching events that happen to real people.

One could probably try and blame Kubrick for this. It always seems to come back to his symmetrical tidiness. But he knew the value of a humane, imperfect interior. Eyes Wide Shut, for example, is full of shots stacked with unobtrusive lived-in detail and until up-and-coming filmmakers learn that lesson, too, we’re in a world where we can no longer recognize our own quirks or idiosyncrasies on screen. 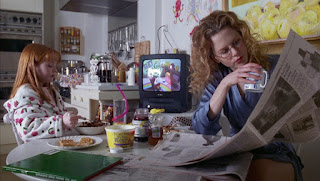 There's something of a moral dimension to this, too. Like I said, the Arrival house reminded me a of a perfume commercial. So: What is the goal of ads like that, of the space they build? It is a space to project desire and foment unquenchable envy. They are supposed to leave us dissatisfied, inadequate. If that's the language in which we're communicating in the lion's share of films, if that's the world we're presenting our protagonists in as a matter of course, we've totally scrubbed the humanity out of our imagination. Empty beauty isn't worth all that much. One would think the generation of filmmakers raised on Star Wars would know that emptiness reflects inward, and the cold spaces are for the bad guys.
Posted by John at 3:24 PM 6 comments: