I bet y'all thought I was done with this series. It seems to have a limited audience, which is too bad because this is the backbone of independent film we're looking at, and today's section, in light of the many recent controversies surrounding Hollywood whitewashing, is all-too-topical. (Incidentally, go see Battleship because aside from the fact that it's a very good film unfairly dismissed, it's one of the most progressive action movies to come out in a long time)

It's been a few weeks, so just to recap: Poverty Row refers to the dozens of cheap production companies which turned out bill-filling movies between the dawn of the sound age and the end of the studio system. These were the knockoffs, the cash-ins. A second cinema of ignoble titles, but sometimes quality snuck in through the cracks.

One of the most important features of the movement is that it served as a showcase for talent who never could get work elsewhere. There were a lot of reasons for this. Edgar Ulmer was blackballed from the major studios because he stole the wife of Carl Laemmle's nephew. Bela Lugosi's crippling morphine addiction made him too much of liability for any big budget film. John Wayne was sent to Poverty Row after his star vehicle The Big Trail bombed, before John Ford rescued him.

And a great many very talented actors, writers, and directors were cast out to the back alleys of the film industry for one reason: They were black.

There's just too many titles and people to go over here, so I'm only going to try and rescue two from obscurity. First: 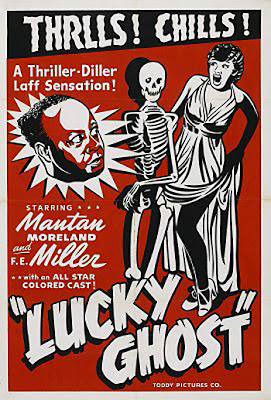 
Lucky Ghost a.k.a. Lady Luck is a 60 minute quickie about two bums who find their way into a sanatorium which is a front for a haunted casino.

It stars Mantan Moreland, a very complicated figure. He played the stereotyped comic relief in some of the most loathsome films of all time, like Monogram's 1941 King of the Zombies, the movie that made one critic ask Moreland, "Have you no self-respect?" That's a damn harsh sentiment, and not an uncommon one. Spike Lee twice invoked Moreland to stand in for an entire era of racist entertainment.

And yet, the man was funny!

Perhaps not in King of the Zombies, which I hold in a special contempt, but certainly in his comedy record. And certainly here, in this very pleasant surprise.

He's kind of got a slouchy WC Fields charm. At the film's outset he's so broke he "just wants to know what food tastes like once more," but as things go he proves himself to be the wiliest and smartest conman in town. It actually seems like a lot of fun to play. It's lowbrow comedy for sure, but witty as hell. 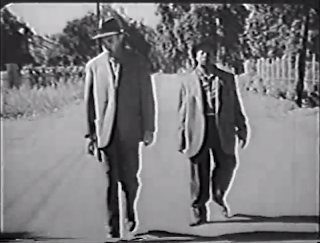 F.E. Miller, Mantan Moreland. As you can see, this film needs restoration work.

This was right at the height of Moreland's career. He made 15 movies in 1942! He started out in the background of the exceptional The Green Pastures, which makes an interesting double feature with The Blood of Jesus.

After this, he took a recurring role in the Charlie Chan films until 1949. The '50s were not kind to the man - the burgeoning Civil Rights Movement recontextualized his work- through the entire decade he only appeared in a Hallmark Channel remake of The Green Pastures.

But I 1955, he was almost a Stooge! The Howards loved him and always kept tabs on his career. After the death of Shemp, Moe and Larry wanted Mantan to step in. I wonder how different he would be remembered if Columbia Pictures hadn't demanded a white man to replace Shemp. What a position he was in - shut out by both sides of the Civil Rights fight. 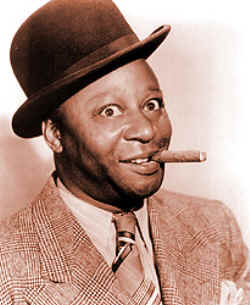 Moreland's wit may have salvaged that dying comedy act AND elevated his own complicated career. As it stands, he made a late-career rally anyway, appearing in Spider Baby and Watermelon Man at the tail of the '60s. It's very appropriate that this man ended his career in two complicated, bizarre, under-appreciated masterpieces.

His cohort in the film, F.E. Miller, fared better. He was a Broadway luminary - he made his Broadway debut in 1907 (!) and got a posthumous Tony in 1979. That's a dizzying breadth of work. 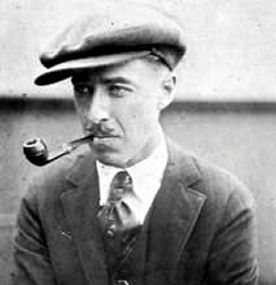 Director William "One-Shot" Beaudine started with Griffith and went on to make as many films as anyone - some estimate 500. Among them is Mom and Dad, a sex film which held the title of the most profitable film ever made until Blair Witch. He also helmed the ridiculous two-fer Billy the Kid Meets Dracula and Jesse James Meet Frankenstein's Daughter, genre mash-ups that were nothing if not inevitable.

Another standout in the film is Arthur Ray as Blackstone, an actor I know next to nothing about who only appeared in 14 movies, all around this budget level. He gives a terrific performance as a trim and smart bad guy. Would love to know more about this talent.


and on DVD in a two-pack with the exceptional Spirit of Youth with Joe Louis.

I'm not done with this sub-genre. If you want to get a head start, next up is the very different, very fascinating Blood of Jesus (1941), which has a much-earned spot in the National Film Registry.
Posted by John at 9:16 PM