Some Actors You May Not Have Noticed in The Godfather 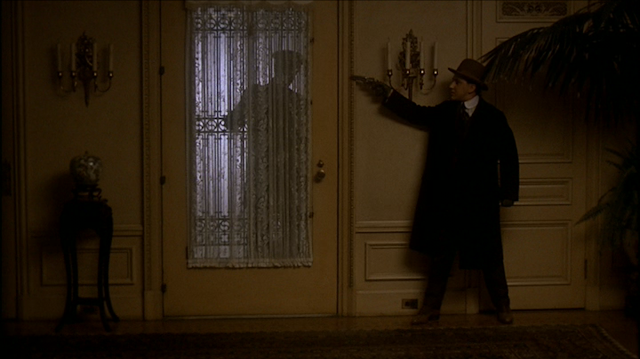 Boy, the cast of the Godfather series is overwhelming, isn't it? From Brando to De Niro, and all the little points along the way like Sterling Hayden and Bruno Kirby (pictured above about to ice a cop), it's almost certainly the greatest cast of actors ever assembled.

Everybody remembers Talia Shire and James Caan and all, but it's easy to forget about the terrific one scene, two scene performances that enliven the films. The spices on its Al Pacino pasta.

Some Actors You May Not Have Noticed in The Godfather Trilogy: 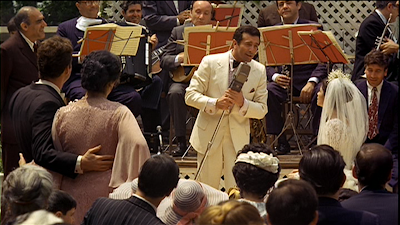 I'm sure y'all remember Johnny Fontaine, the Sinatra-esque lounge singer who incited the horse-head incident. He was played by real-life Italian crooner Al Martino, who made it into the record books with his 1952 song Here In My Heart, which was the number 1 hit on the first ever UK Singles Chart. "Here In My Heart" topped the charts for 9 weeks, a record that's only been beaten 5 times, and Martino's works stayed on the UK charts for the entire year of 1952, a feat which has never been repeated. 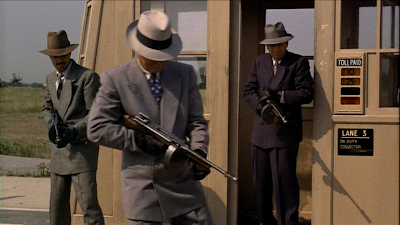 These are the dicks that killed Sonny, my favorite Corleone. On the far left there, rocking a serious mustache that can hardly even be tamed by Gordon Willis's face-obscuring lighting, is Randy Jurgensen, who acted as one of the film's technical advisors. William Friedkin turned Coppola on to the man, who legend has it flicked on his siren so they could shoot that car chase in The French Connection on active streets. Jurgensen broke The Bag Murders, a real-life string of grisly homicides that was adapted by Friedkin into Cruising. 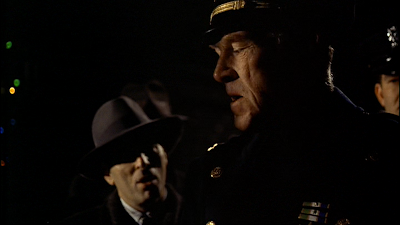 The other technical advisor was this guy: Sonny Grosso, pictured here trying to get Sterling Hayden's Captain McCluskey to leave Michael alone - the voice of reason against the punch that would send McCluskey to his grave and Michael to the head of the Mafia. Grosso not only worked with Jurgensen on The French Connection, he was one of the two cops who actually cracked the real French connection - the inspiration for Roy Scheider's character in the film. 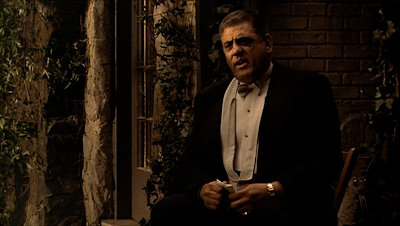 Everyone knows that the scene of Luca Brasi rehearsing his speech to the Don was added because of the actor's real-life nervousness about acting with Brando, but did you know that Lenny Montana, the man who played Brasi, was an actual mob enforcer before going straight? He was a convicted arsonist! 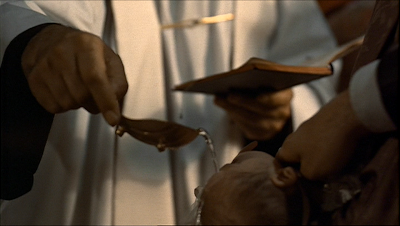 This here baby, the one baptized during Michael's climactic murder spree, is played by Sophia Coppola, which makes her one of very few people to play two different characters in the series. 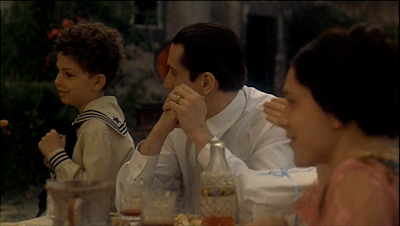 Coppola was pretty slick about including his family and here his son Roman Coppola plays a young Sonny Corleone. This little goofball went on to write Moonrise Kingdom. 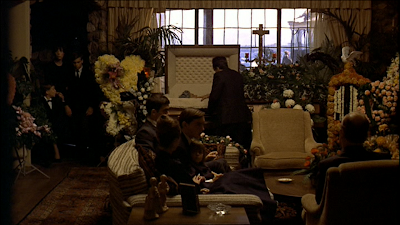 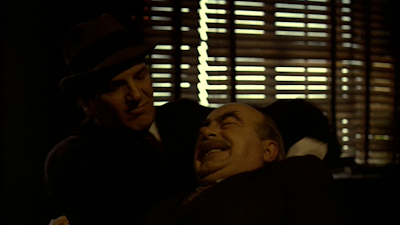 This guy pulling a garrotte on Pentangeli is Danny Aiello, a wonderful actor best known as Sal in Do the Right Thing. This was only his third acting gig, and his ad-libbed "Michael Corleone says hello" was a hell of a premonition of the great career ahead. 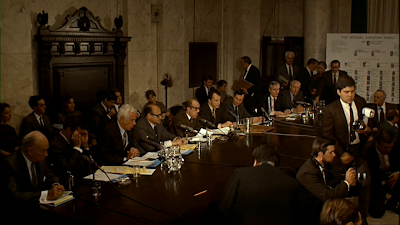 The pivotal Senate hearing is a cavalcade of interesting cameos. That guy down at the bottom right with the beard and the camera held out is Gary Kurtz, the producer of Star Wars who contributed much of the mystical elements, crafted the darker tone of The Empire Strikes Back, and who famously left the series over objections to the toy commercial tone of Return of the Jedi.

Somewhere in this crowd are producers William Bowers and Phil Feldman, who have between them two of the best westerns ever made: The Gunfighter and The Wild Bunch. Feldman was also Coppola's agent for a time. Unfortunately, I don't know what they look like so I can't ID them. 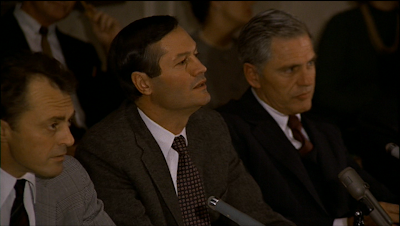 But I do know what legendary producer Roger Corman looks like! He's the fellow in the center whose clean-cut looks belie the gritty films he spearheaded. Corman produced Coppola's directoral debut, 1963's Dementia 13. If you're ever strapped for something to do, read up on all the filmmakers Corman got off the ground - Martin Scorsese, Ron Howard, Peter Bogdanovich, Jonathan Demme, James Cameron, John Sayles, Jack Nicholson, Dennis Hopper, Talia Shire, Robert De Niro, Robert Towne, among others. He may have done more for American film than any other single human being.

There's a rumor that the guy on the left is writer Richard Matheson, but alas, that's just a rumor. 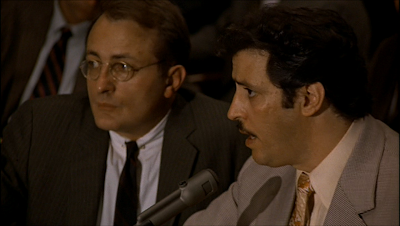 On the other end of the Senate's table, at right, is Joe Spinell. He's a minor icon to horror fans for his lead role in the ultra-violent Maniac, a project he also wrote. Fun fact about Maniac: Michael Sembello's theme for Flashdance was originally written for the film. It wasn't used, so he changed the words up to be about a "steel-town girl on a Saturday night" and made history.

Spinell, who died in 1989, was good friends with Sylvester Stallone and appears in the first two Rocky movies as Tony Gazzo, that surprisingly nice mobster Rock worked for. In reality, Spinell took care of Stallone while the man went broke trying to get Rocky made, and it's likely the film wouldn't have happened the way it did without Spinell. 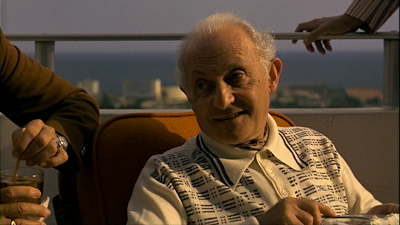 Kingpin Hyman Roth looms over everything in Godfather 2, just as Lee Strasberg loomed over all of the actors of its generation. Strasberg was head of the Actor's Studio in New York, which has since been converted to the James Lipton Institute for Weird Pointless Interviews. He worked with Elia Kazan, Tennessee Williams, and Sidney Lumet in creating a new concept of "acting from the inside out," a technique Montgomery Clift, James Dean, Marilyn Monroe, Robert De Niro, Al Pacino, Julie Harris, and Paul Newman considered gospel. That's young Vito and Michael Corleone under his wing, but not The Godfather Don Vito himself - Marlon Brando hated Strasberg. 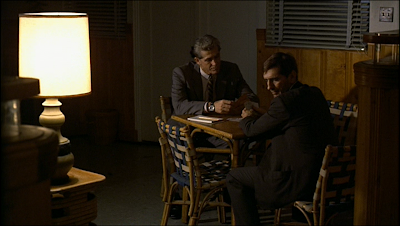 Hey look at that! Squeezed between his Monte Hellman films Two-Lane Blacktop and Cockfighter, four years before his unforgettable death in Alien, famed character actor Harry Dead Stanton pops up in Godfather 2 as one of the FBI men assigned to protect state's witness Frank Pentangeli. 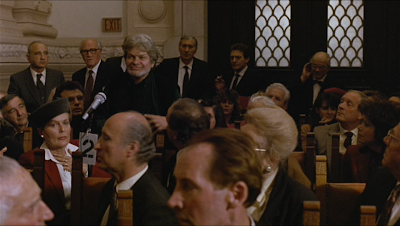 I'm sorry to bring Godfather 3 into this. The Michael Corleone story is better concluded in The Devil's Advocate. Godfather 3 is a bad film, but there are some absolutely bananas cameos, like Beat poet Gregory Corso here protesting the Corleone family. Corso was the youngest of the Beat poets, 8 years Kerouc's junior, and 16 years Burroughs's. The kid had it where it counted, crafting perfect lines like "know that in the hearts of men to come more bombs will be born," from his 1958 "Bomb," a poem cherished by a young Bob Dylan. 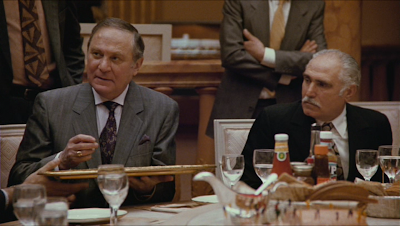 On the left here playing New Orleans crime boss Matty Parisi, we have the famous blacklisted writer/actor Mickey Knox. Knox had a storied life - among other highlights: he was in Norman Mailer's inner circle during the era he would turn into The Deer Park, he fled to Italy because of the blacklist where he witnessed the suicide of Al Mulock on the set of Once Upon a Time in the West. That's the famous story about Sergio Leone rushing towards the body yelling "save the costume!" Woody Harrelson's character in Natural Born Killers was named in his honor. 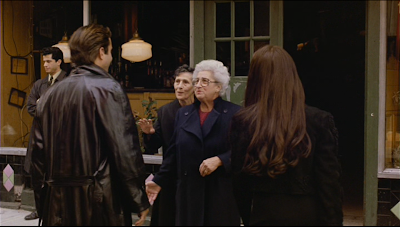 Remember Pesci's mom in Goodfellas? "Why don't you get yourself a nice girl and settle down?" I'm sure you know that was Martin Scorsese's real-life mother. She's a hell of a charming presence, and it's wonderful to see her here in Godfather 3 yelling at Andy Garcia. This was the same year as her son's much superior Goodfellas, so can you blame her? 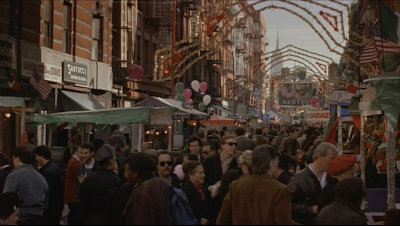 
There's a ton more - it's like every scene is overstuffed with interesting actors, so feel free to add some in the comments.