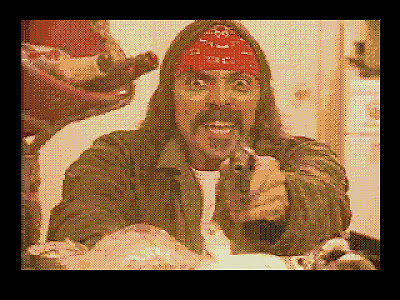 
I know it's really weird to have two Sega CD posts in a row, particularly on a film site, but y'all need to watch this. Need.

It's a playthrough of the entirety of Crime Patrol, a 1994 live-action arcade game (remember those? You had a lightgun and it would play looped sequences while you shot the bad guys.) charting your ascendency in the LAPD.

It is insane. The whole thing has this hypersaturated pointillist look because of the low quality of the source video and this knockoff Lethal Weapon riffs-and-wooden-drums soundtrack, which give it an imimitable cheerful early '90s vibe while you brutally gun down hundreds. Lame actors jump in front of your gun for a chat to throw you off, while bad guys steal plutonium and planes and fall off of every catwalk available to fall off of.

It's crazy, clinging to that classic '80s Reaganist fascism that looks so ridiculous now but was so deadly serious then. I don't remember if I played this as a kid, but I can absolutely see myself at some crappy bowling alley arcade scarfing pizza and shooting bad guys, me and my boys running into airports in ski masks gunning for, I swear to God this is actually in the game, the terrorists trying to assassinate "Prince Doo Doo."

There's a level which is nearly identical to that controversial Call of Duty level, which is a good reminder that in a few years our propaganda will seem as absurd. I can't wait.
Posted by John at 2:25 PM