Here's an interesting pairing of rare films available on YouTube:

The 1967 ABC TV production of surrealist Jean Cocteau's stageplay The Human Voice is one of my absolute favorite films. It's a small, heartbreaking work which exposes a rawly human side Cocteau usually kept under wraps.

The whole thing is one hour long phone conversation a woman has with her estranged husband. It's a one-woman show by Ingrid Bergman. We never leave her apartment, or, really, her eyeline. Her peculiarly fragile voice and the sense of age creeping into beauty compliment a powerful and draining role.

Cocteau nails the central poignancy at the heart of phone communication. The line is constantly fading in and out here, it's a fragile and tenuous connection, one which frustrates as much as satisfies.

The Human Voice was directed by Ted Kotcheff, a prolific filmmaker who went on to do films as diverse as Wake in Fright, First Blood, and Weekend at Bernie's.


Now, when you're done with that, check out the ultra-rare 1988 Whoopi Goldberg vehicle The Telephone, another film about an unbalanced woman making phone calls one lonely night, and another film about the central poignant contradictions of phone communication. 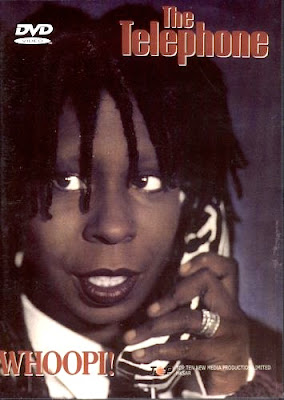 Whoopi plays a woman named Vashti Blue, an out-of-work actress who can't pay her phone bills even though without it she can't get work and ceases to exist to the outside world. She comes home to her lonely apartment one night and kills time venting, playing with her fish, and making prank phone calls. As the night goes on, we learn more and more about just how unbalanced she is.

This is the sole directoral effort of Rip Torn, an actor who's always had a foot in the languid avant garde. It has the feel of the work he did with Norman Mailer, which was always confrontation and shapeless but strangely watchable. Scriptwork here was done by Harry Nilsson and Terry Southern, as strange a pairing as one can imagine.

Whoopi fought to have this one suppressed, and ya can't blame her. It's a difficult, nearly inaccessible work, mostly because of its refusal to settle on a tone, jackknifing between broad comedy and claustrophobic moroseness.

Where Cocteau and Kotcheff treated their woman with dignity and love, Torn, Southern, and Nilsson have little but ironic contempt for their character. She slips into a never-ending stream of racial monologues which have not aged gracefully, and the drama comes in at such strange angles to the story that it fares even worse than the comedy. Bit of the same vibe as The Room, this one.

It's not a good film, per se, but it a singular film, and one well worth watching for any connoisseurs of the weird, or anyone interested in pressing against the limits of mainstream cinema. You'll never again see Whoopi Goldberg probe sexual frustration and loneliness.

Pair these up and you have one elegant, near-perfect picture, and one sloppy, near-awful picture. But it's amazing how alike they are in their differences - their opposing approaches seem to unite at an aching and uniquely feminine insecurity the telephone has a way of bringing to a boil.

Check them both out. You'll never forget either.
Posted by John at 12:07 AM