Here's another little gem for y'all from the stacks at YouTube.

'60s TV loved to try its hand at Hitchcockian thrillers, and this here is one of most interesting I've come across. The look is terrific, pure '60s Hitch - I can't believe it predates Marnie! It's an inversion on his classic wrong man accused of a crime story, as it's about the right woman trying to not get caught.

He's alright, but the real highlight on the male end is Jack Weston, a character actor y'all probably best remember as that pain in the ass neighbor from "The Monsters are Due on Maple Street." 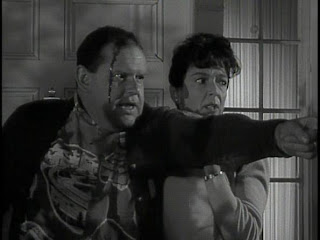 He's got a lot to chew on here, in a really sleazy role crackling with sexual anger.

The story is satisfying, a little slow in the middle and a little heavy-handed at the end, but at times, actually very tense. It's aided by a Bernard Herrman-lite scored composed by young "Johnny" Williams. Wonder if anything became of him...
Posted by John at 10:36 PM