Some Words About Psycho

We begin Psycho peeping at Marion Crane, just Bates peeped at her before killing her.

We pull in from outside Marion's hotel window to leer at her and Sam's tawdry little love scene. It's voyeuristic and cheap of us, especially considering how deeply sexual the scene is - and jeez, for all the violence, Hitchcock slipped a LOT of sex past the censors. 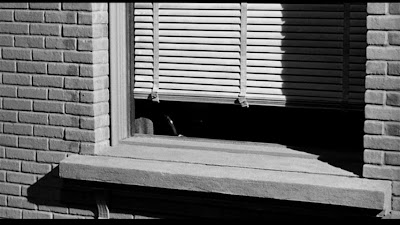 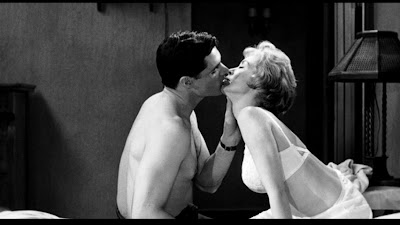 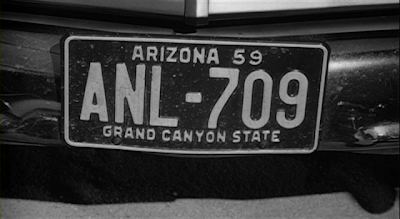 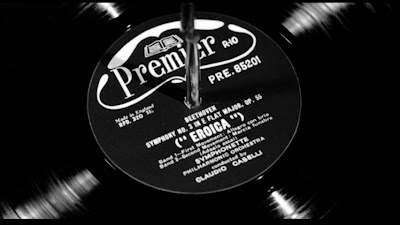 Poor Norman can't get no satisfaction, and his inadequacies define him. Look at him next to Sam Loomis, true to his name looming over him, a taller and more handsome mirror, just as lookalike Lili Crane is a more innocent mirror of her sister Marion. 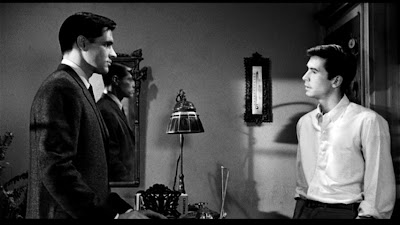 Loomis isn't the only one who looms in this film - just look at Arbogast, who has less screentime than you probably remember. You get an instant sense of his aggressive personality, though, in his first shot in the film when he moves uncomfortably close to the camera, staring us down. Maybe he knows we were peeping at the beginning. 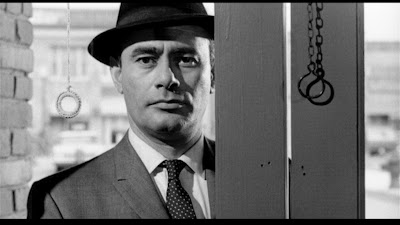 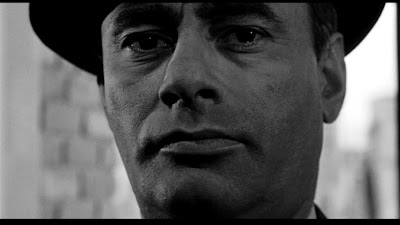 That cop gets too close to us, too. 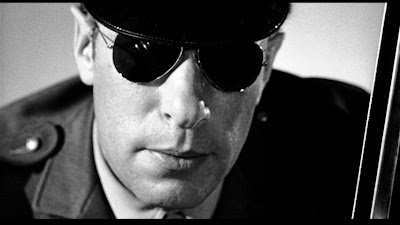 And he's particularly upsetting because his blacked out eyes anticipate the empty eye sockets of the late Mrs. Bates: 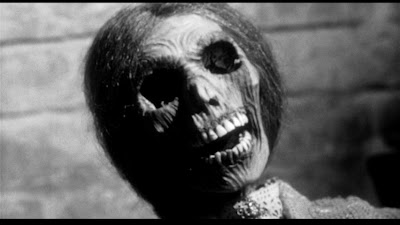 And of the half-blacked out eyes of Norman, seen as the psychiatrist assures us he was only ever "half-there." Look at his eyes compared to the very alive Lili Crane. 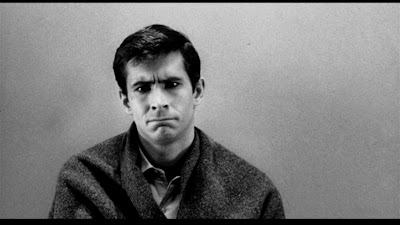 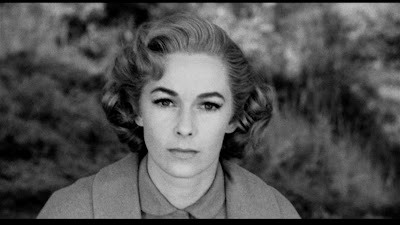 And for a moment there, just like Norman/Mother's face famously dissolves into a skull at the end, poor dead Marion's eye dissolves into the black abyss of the shower drain, as empty and skull-like as the Bates family and that looming cop. 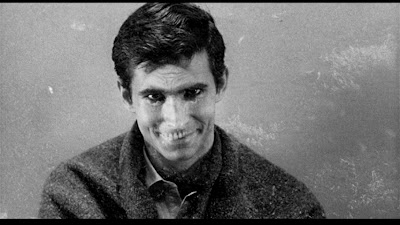 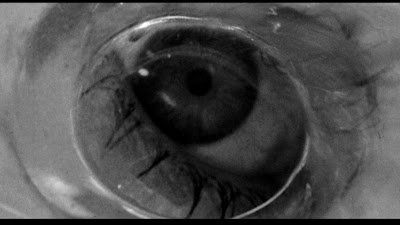 Everybody looms in Psycho, like that great owl in Norman's office, hovering over him like his mother in her high window on the hill. In between Norman and that owl are images of naked women at their moment of dying. Premonitions, perhaps, or maybe a demand. 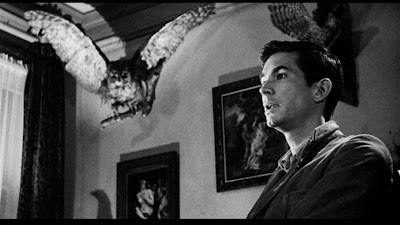 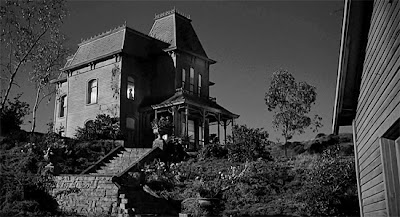 That's a demand Norman acquiesces to, killing Marion in a scene shot partially, memorably, from a bird's eye point of view. 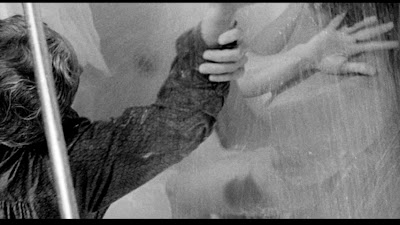 The murder of Arbogast is also from a bird's eye perspective. 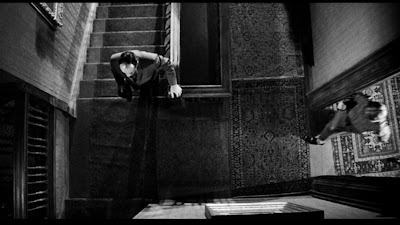 As is the shot of Norman moving his mother to the fruit cellar. In all instances, Mother is active. 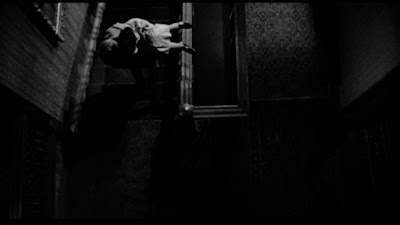 There's a moment there at the end when Sam, the stronger mirror of Norman, and Lili, the more innocent mirror of Marion, find proof of Norman's crime - a scrap of paper that didn't flush down the toilet like Marion's car flushed down the swamp and her blood flushed down the drain, and like Mother was flushed down to the basement.

This is the only other shot from a bird's eye point of view, and there's a moment there, every time, where you expect Norman to burst in. It's as subtle and perfectly structured as anything I've ever seen, a careful and tense return to a shot that reminds us of death without us even realizing it. 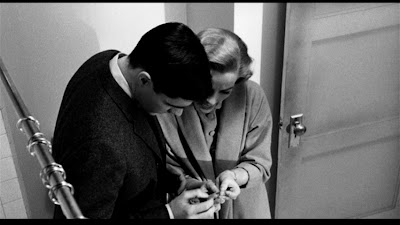 All these birds, all these Crane women and stuffed owls and women who "eat like birds" and pictures of chickadees at murder scenes: 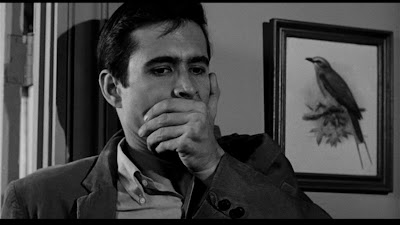 also build up to remind us of death, without us even realizing it, so we don't even consciously understand why we're so alarmed by this strange bird-like pose Norman makes: 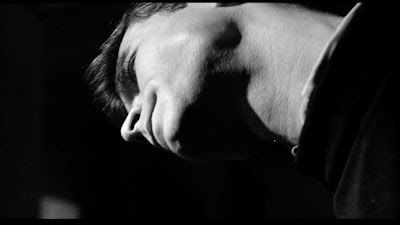 or this little moment right after Marion unwisely advises Norman to leave Mother, the first instant that on some level he knows he is going to kill her, when Norman briefly cradles the nearest bird: 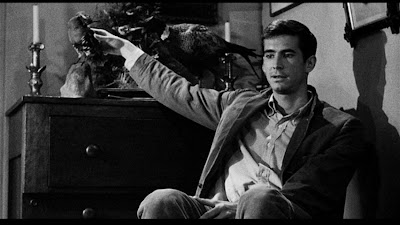 Hitchcock of course devoted his next film to the topic of birds that bring death. The Birds also trades in the black eyes of the dead: and attacks on blondes in confined spaces: 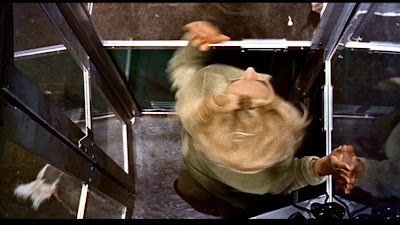 It's a film which even replays the key scene of Psycho in its original form.


At the beginning of Psycho, while we're peeping in on that desperate little romance, Sam tells Marion his great ambition is for the two of them to find a private island. Marion repeats this later on, realizing it's her great ambition too. Shortly thereafter, she decides to return to Sam.

And, again, there's another Hitchcock film where a beautiful blonde with money to burn and a penchant for trouble takes a lonely drive 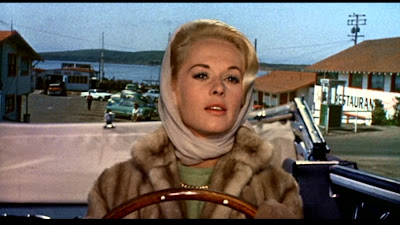 to a secluded island where romance awaits. 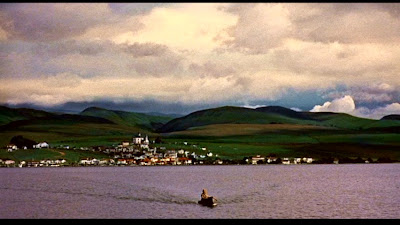 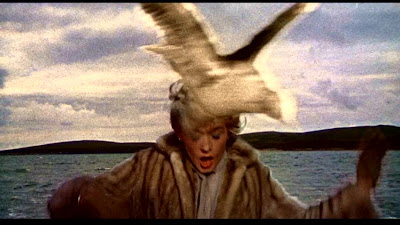 It too has a bird's eye view. 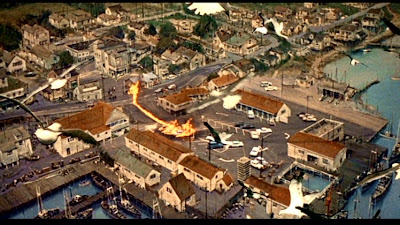 screencaps from the amazing 1000 Frames of Hitchcock.
Posted by John at 9:20 PM