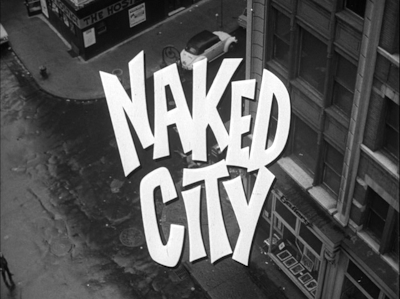 It's been a hard show to find until this month when finally 50 episodes came back into print on DVD. Could've used a Blu-Ray, but hey, it's a start.

Naked City was a 1958-1963 crime drama shot live on the streets of New York. It's a kinda-sorta adaptation of The Naked City, Jules Dassin's lovely-looking (if a bit dull) 1948 film about one criminal case in New York City. This film is the source of that famous line: "there are 8 million stories in the naked city, this is one of them." Dassin's film was itself kinda-sorta inspired by Weegee's earth-shattering 1945 true crime photo book Naked City.

Weegee's book was bigtime because it was one of the first unflinching photographic studies of the underbelly of the American city. His photographs went from the newspaper to the MoMA, legitimizing depictions of the poor and the helpless. Dassin's film didn't get into this territory, but it did revel in the same alleys and docks Weegee explored.

He did not disappoint. Naked City the series is true to the spirit of Dassin and Weegee's naked cities. Death is very present in this show and always horrifying. Cement, dirt, crowds, and the dizzying verticality and layering of this singular city are present in each and every moment, downright inescapable because there are virtually no studio sets - and in fact the few locations that are sets are the old Biograph lot up in the Bronx.

I love this show. I love how smart it is, how open-hearted, how historically valuable... I can go on and on, so I'll cut this line of thought off with this: 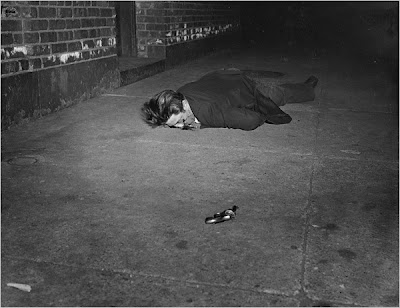 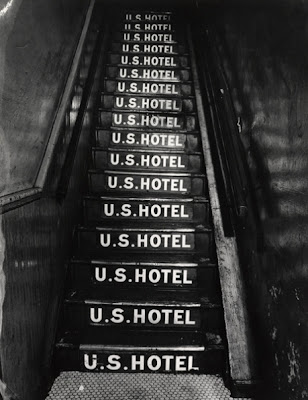 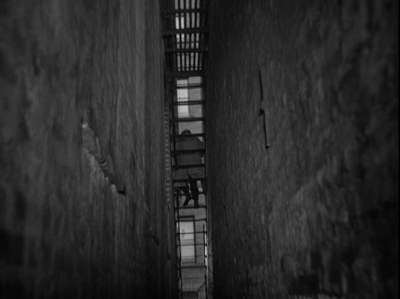 
But there is this one episode in particular that I want to discuss in a bit more depth. It's the episode those images above came from, the season 4 opener "Hold for Gloria Christmas." 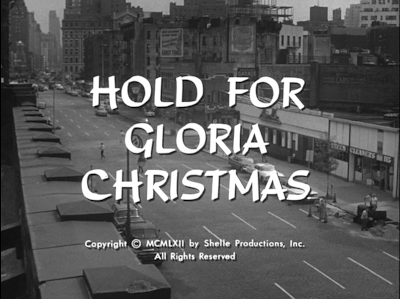 "Hold for Gloria Christmas" opens with the death of a poet.

The poet is a sweaty old drunk who starts a fight with a seemingly reasonable, long-suffering bald man. This fight ends quickly and decisively - the old poet's face beat in with a rock on the corner of West 4th on a drizzly gray day. As the life leaves this man, a bassy narrator assures us of two things:

1. This man, Duncan Kleist, is not a good poet.
2. The police will, of course, find his killer.

It's a weird opening, idn't it? Seems calculated to suck the drama out of the events. There's no fancy lighting, no bombast. Just a poor pathetic guy, dead on the street and we already know who did it. AND we know he'll get caught. See that's the cool thing about Naked City, it was never really interested in the procedure of police work. Like its descendants Homicide and NYPD Blue, Naked City is really about the toll death takes on the human spirit. This is best expressed in "Prime of Life," in which the criminal is caught before the episode begins and we simply spend an hour waiting for his execution to begin.

Well, after that dark beginning, "Hold for Gloria Christmas" re-introduces us to the show's main cast. Detective Adam Flint, played by Paul Burke (Ashley Shawcat of Arrested Development's grandfather); Lt. Mike Parker, played by Horace McMahon; Det. Frank Arcaro, played by Harry Bellaver; and Libby Kingston, played by Nancy Malone. They get to work detecting and crack the case, just like we were promised. Along the way, Kane-esque flashbacks fill in the sad, touching life of Duncan Kleist, a man maybe not as pathetic as we first thought. So ends another story in the naked city.


That's our framework and frankly it's not the best - it's not even in my top ten or twenty of the series. It's a bit dated and a bit inconsequential so it doesn't have the gravity of the show's best. However, it's one of the most important episodes of the show, and of the era at large, because it's pretty much as unique and exceptional a set of actors as has ever been assembled.

Duncan Kleist, that old drunk poet, is played by Burgess Meredith, who headlines this episode. 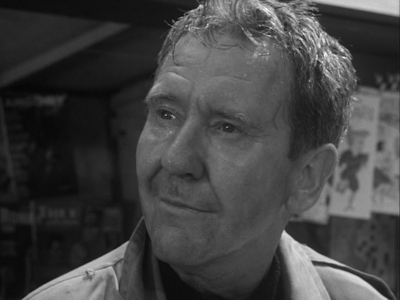 Burgess was an interesting kind of an actor - probably best known for Rocky, he was really born for television. Between his four classic Twilight Zone roles and his indelible turn as The Penguin in Batman, he possessed a clever largeness that classed up the many television productions he guest-starred in.

Meredith dies like a champ, delivering poetry to the empty sky. The detectives hit the scene and track down one of the last people to see him alive, Dr. Hennickson, played by Henderson Forsythe, who was even more of a TV fixture than Meredith. Forsythe, here in the white coat, played a doctor on As the World Turns for 32 years. I don't know if that's a record, but it's gotta be close. He had a hell of a Broadway career also, playing George in the original run of Who's Afraid of Virginia Woolf?, Petey in the original run of Pinter's The Birthday Party, and the Sheriff in the original run of The Best Little Whorehouse in Texas. He's also an extra in Species II, so there's that. 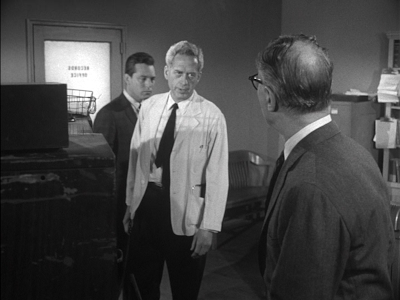 Dr. Hennickson sends the detectives off to Mildred Pepper, Kleist's only friend. Pepper fools around with her, what is that, a loom? while the detectives question her. She's played with heartbreaking anguish by Eileen Heckart, who played Paul Newman's mother in Someone Up There Likes Me, Marilyn Monroe's crony in Bus Stop, and Goldie Hawn's enemy in Butterflies Are Free, for which she won an Oscar. She puts in work here as good as any of those roles. 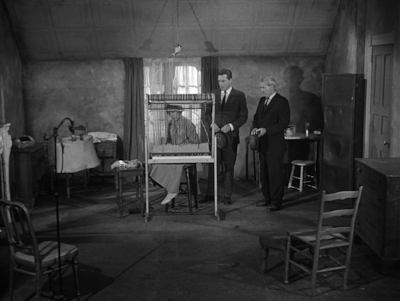 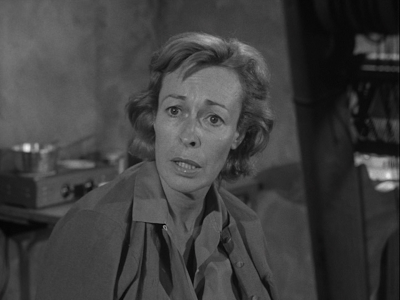 She reminisces and we flashback to her bitter clashes with Kleist. She's powerful here, wounded and desperate, and Burgess sinks his teeth into this scene, one of the least sympathetic of his long career. There are shades of Mickey in it.

My man Burgess was a fixture of television. His character's death next brings the detectives to an associate of his, Kip Harris, played by a man who was definitely not a television fixture: Sanford Meisner. 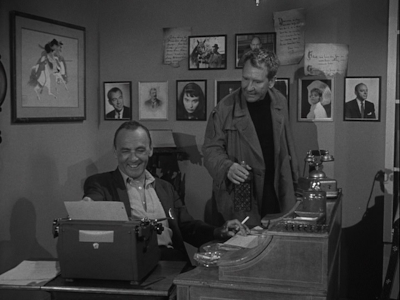 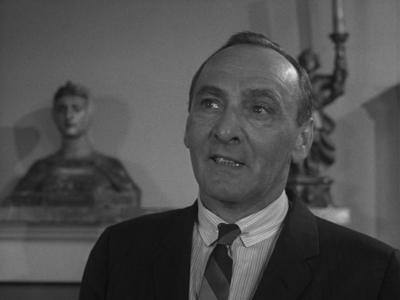 I spoke about Meisner a bit in my article about the Godfather series, one of the few other appearances he makes on film (Elaine May's masterpiece Mikey and Nicky is another. Go watch that.). Meisner was an acting teacher who helped popularize Method. His particular approach, the Meisner technique, promoted "truth in a fictional setting," a kind of acting from the inside out. It's still taught in acting schools to this day.

Meisner is a magnetic presence, playing a sleazy rich writer with verve and wit. Man like that's bound to have a wife, and that's where it starts to get fun. 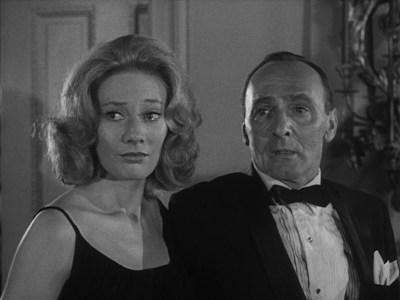 A Meisner sighting is rare, but not half as rare as that lovely woman he has in tow. That's Candace Hilligoss, best known - ONLY known - for playing the lead in Carnival of Souls. It was her only successful film and her only leading role. She put in amazing work in that film; her dazed and mysterious blonde was a standard-setting and a strong inspiration on Catherine Deneuve in Repulsion and Naomi Watts in Mulholland Drive.

She's mysterious and magnetic in this, too. It's a rare pleasure to see her at work again. 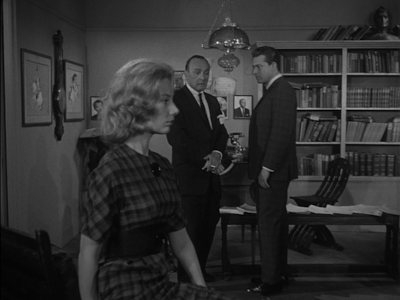 This is Hilligoss's acting debut, and it's far from the only debut in the episode. Check this out: 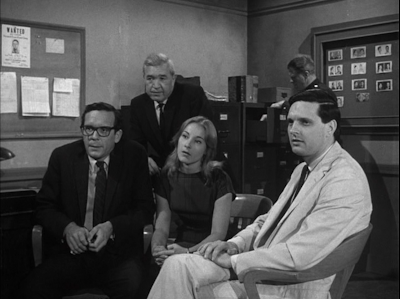 That shot right there is the first ever film or television appearance of Alan Alda. He's baby-faced! I love it. The woman next to him is Barbara Dana, Alan Arkin's wife who had a brief tenure in the early years of Sesame Street. Next to her, in the glasses, is John Lassell, a stalwart character actor with a long TV career including some time on Dark Shadows and a bit part in the best episode of Rod Serling's TZ follow-up Night Gallery.

These three flash us back to a low point in Kleist's life, when Alda's character calls him out on plagiarizing some poems. Burgess Meredith's Kleist stumbles into a seedy Greenwich Village poet's bar, desperate for a drink. The bald man we saw kill him glances over, sure trouble is coming. Behind him, for the briefest of moments, we get a glimpse of Richard S. Castellano, best known as Clemenza in The Godfather. Castellano's playing a bartender here, and that's him below behind the bar pouring a drink. This is his first TV appearance, and if you keep your eyes open you'll see him kicking around the background of many Naked City episodes. 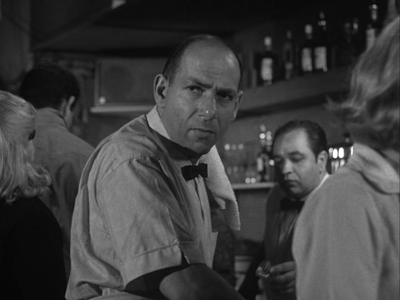 Meredith tries to bum a drink off of the bald man. In the background, sharkish and scarecrow-tall, Alan Alda's rival poet approaches. Alda challenges Meredith to a slam-poetry contest in which he uses the same trick the Clovers used on the Toros to shame the old man, setting in motion the events that killed him. 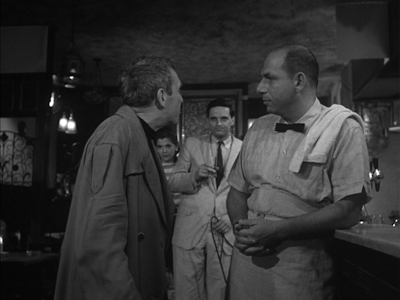 But, wait, who's that woman in the shot? The one at Alda's right shoulder, in the striped shirt. Where have I seen that face before? 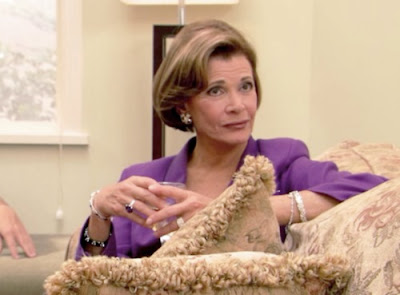 JESSICA WALTER OUT OF NOWHERE! 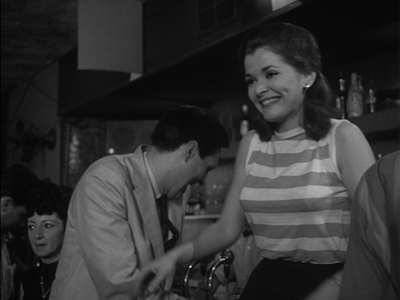 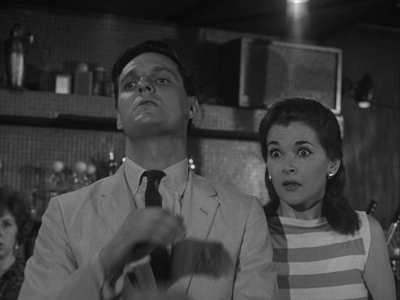 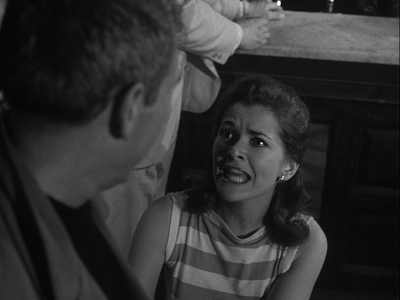 This is her debut, too, and she milks every second. She teases and snaps at Kleist, bringing to bear some of that great comic cruelty that would define her work as Lucille Bluth and Mallory Archer. Look at those pictures. That's Hawkeye Pierce and Mallory Archer making fun of the Penguin. This is the magical world we live in, each and every day.

Like I said: a unique mix of talent in this episode. It caught a magic moment when all sorts of different actors were beginning or ending long careers in New York.

New York is a character as much as anyone else in this show. Naked City used real locations as often as possible, and maybe for simple reasons of economy, there was a rare unity of place. Kleist dies on W. 4th, and they stay true to that. Here, Detective Flint passes by Music Inn, a store still open on W. 4th today. It's a small thing, but it helps the show explore real and unique locations. 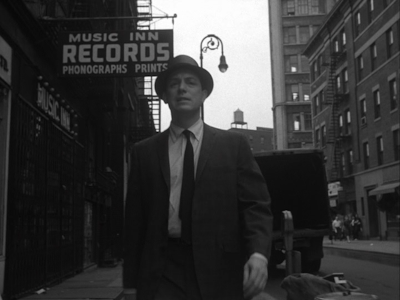 The episode opens at a news stand, obviously a real location full of real magazines from the show's August 1962 shoot, and, like I said, there are a lot of debuts in this episode. Look at what are hanging just behind the actors' heads. That is Amazing Fantasy #15, the first comic book to feature Spider-Man, and next to it is Journey into Mystery #83, the first comic book to feature Thor. 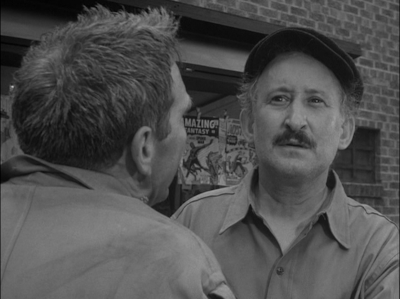 They just didn't know what they had.