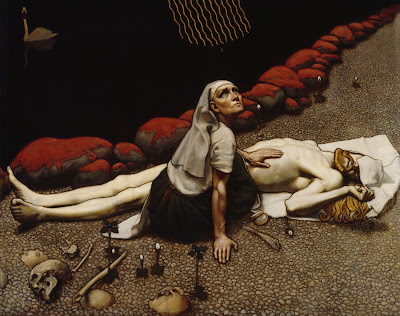 
another painterly one from Roni Lücke, who provides some context:

Lemminkäisen Äiti, or Lemminkäinen's Mother by Akseli Gallen-Kallela portrays a scene from the finnish mythological epic Kalevala. During a quest for the hand of the beautiful, magical daughter of the land of Pohjola, the womanizing war-hero Lemminkäinen hubristically kills a holy swan and thus in retribution has been cut apart at sword-point and cast in the black river of Tuonela (the underworld). Lemminkäinen's mother arrives to the scene and rakes her son up from the river piece by piece, until she can put him together.

Does this make the Emperor a wicked witch/bad mother instead of a wizard?
Posted by John at 1:28 PM