The Castle of Doom, the American cut of Vampyr

Every now and again I like to go dumpster diving in the massive film library at archive.org. Some amazing stuff can be found there, and I highly recommend you root around there for a while, because sometimes you'll see something you never imagined you would, like, say: 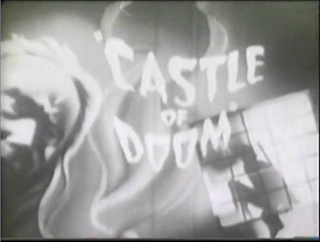 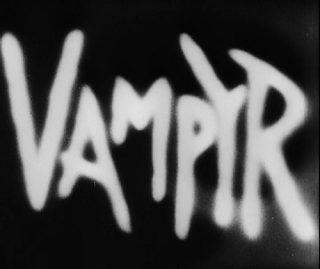 If you haven't seen Vampyr, it's a haunting 1932 German film about a traveler and a vampire. It's a talkie, but an extremely quiet one. Entire scenes will go by with no sound at all beyond the threatening hiss of the soundtrack. Scenes play out with a perfect logic, but we're never quite let in on it, and some events take several viewings to understand. It has a dark, complex, guarded heart that's comparable to the middle hour of The Shining or Eraserhead. Film4's Anton Bitel put as well as anyone has:

In a triumph of the irrational, Dreyer's eerie memento mori never allows either protagonist or viewer fully to wake up from its surreal nightmare.

Like most great horror films, Vampyr was panned on release. Too weird, too slow. So come the film's American release in 1934, the distributors at General Foreign Sales Corp. took a machete to the film and tried to hack a traditional monster story out of this weird, eerie masterpiece. 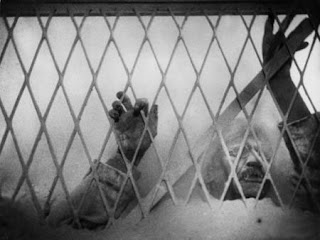 It really is a creepy movie.
The result is this 53 minute, dubbed, narrated, recut, elucidated version under the English language title of The Castle of Doom, a fine title except for that fact that there's no castle in the film. It's an object lesson in how to destroy a film. Watch it on archive.org here.

The original cut opens with Allan Grey walking up to the haunted inn (not castle). Here, that's postponed a few moments for a brief prologue to set the mood. It's a minute or so of eerie low-angle footage of the inn cleverly re-purposed from the central deathdream over text cribbed from Sheridan Le Fanu's "Carmilla," the short story which loosely inspired Vampyr.


This is actually not a bad opening. It reminds me of the prologue to Robert Wise's masterpiece The Haunting. From there, we hop into the story proper and meet Allan Grey. His long uncertain walk up to the inn is trimmed and his awkward moment with the innkeeper disappears. Now, he just walks up and opens the door. It's a small change to save time (why you'd want to trim a 73 minute film is beyond me, but here we are), and the first of many to subtly alter the delicate mood of the film. No longer is Grey a timid, wary traveller. He's a man with a purpose.

Over this, we're given a rambling voiceover from the one-time enigmatic village doctor about the supernatural which continues basically uninterrupted for like 12 minutes. It continues on and off for the duration of the film, a hum of useless chatter which makes you feel like AM radio is playing over the film.

The American producers (the only name I can track down is the opening credits "Arthur Ziehm presents") were evidently terrified of the film's unearthly silence (which is sort of the point, wouldn't you say?). This fear of silence plays out in a million little ways - they dub in a lot of small sounds and new lines (including a horribly delivered "they're killing him!" at about 16 minutes in which has to be heard to be believed).

The film is assaulted, its eerie poetic heart is made prosaic. Right before opening the dreaded vampire book, Allan Grey (in a quick line squeezed in while his back is to the camera), explains that a cart is going "to the police." This small change is a great example of the way this cut neuters the eeriness of the film - by invoking the police, we're put back in our real world of logic and order and taken out of the film's horrible dream world. This change, one of dozens, ON ITS OWN would have irreparably damaged the film.

The film's best sequence, a shadowy dance of the dead that calls on the visual horror of the First World War and firmly sets the tone for the rest of the film is jettisoned, replaced with breathless lines like: "a hero as certain as the ones in shiny armor which stalked these castle walls in its days of early glory." Once again, there is no castle in the film. 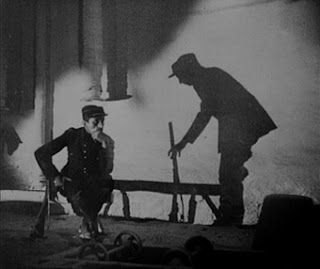 The excised dance of the dead.
This cut is a disaster. It just doesn't work on any level. It even diminishes the power of Dreyer's impeccable camerawork - his long takes are cut short or, in some places, played in a Fatty Arbuckle-esque fast motion. It is therefore an incredible piece of film history, a great way to learn about the power of editing, the concept of different markets, and the overall power of the producers. 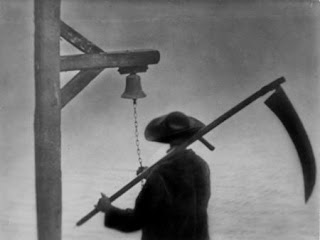 The Castle of Doom has never been released officially. The IMDb doesn't even know that there IS a surviving print. This is a genuinely significant upload, one of the greatest discoveries in the musty online stacks of The Internet Archive. I don't know how long it's been up there - the awesome Monster Kid forums have a thread about it from '09, but the first "watch it here" link is June 2011 - and I don't know who uploaded it (does anybody know how to find out?) but he/she has done a great thing here. Watch it! Watch it here!
Posted by John at 1:01 PM