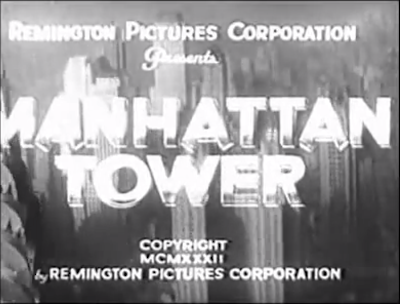 Manhattan Tower is about a young couple in love who get swindled by their sleazy employer. It's all set during one typical crazy day at the new Empire State building. In the end, it's just a simple love story and a simple Stagecoach-ish tale of corporate greed, but it's all told in a very fresh way. It feels contemporary and light, and yet it is very much a product of its year for two reasons:

Firstly, it's totally fascinated by the idea of a skyscraper. This is pre-King Kong, probably the first real cinematic exploration of a skyscraper (I'm almost certainly wrong there so if anyone can come up with an earlier one, post a comment). The sense of vertical scale is omnipresent, and Chekhov's Height pays off at the end.


Secondly, the specter of the Great Depression is all over the film. The very existence of the tower, which is introduced (as its mascot King Kong would be) as "The Eighth Wonder of the World," is played as a remedy to the economic woes which crush the edges of every frame. This was the case in real life. This is one of those movies, like Soderbergh's The Girlfriend Experience or Jeff Nichols' Take Shelter, in which every conversation is about money even - hell, especially - when it's not.

"We never caught up [to our debt] in all these years," we're told early on, a horror which colors every minute of the film. Even if it wasn't any good - which it is - this film would be worth watching just to see this all-too-contemporary view on economic uncertainty and the suffocating pressures of debt. 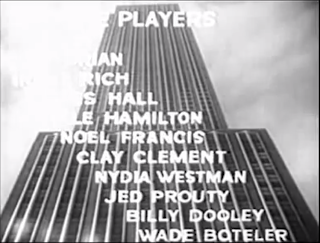 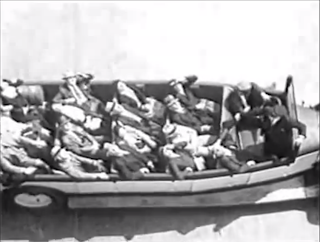 In the film's first shots, we're shown a few New York milestones (including the Chrysler Building which, let's face it, is the prettier building), culminating in a overwhelming shot of the Empire State Building splashed across the screen from edge to edge. We're craning up at it. We move in on our first characters, two window washers suspended above the city. We view them from below. Then we see a busload of tourists craning their necks up at the window washers, we see the from above. We see our leads enter in a bird's eye view, too, and it's not until everyone's settled in and working in the skeleton of the building that we get eye-level with anyone. 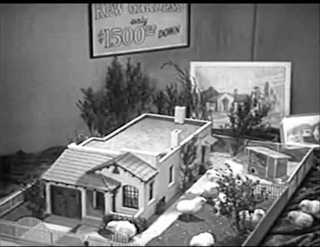 The film isn't using its verticality to make judgements, but instead to place us all together, window washers, tourists, bosses, and employees as cogs in a great metropolitan wheel. Height equals perspective here, as in a lovely scene in which a spatting couple reconciles while watching a bunch of chicks in a model house from above. I love this moment - characters we once watched from a bird's eye perspective now watching birds from the same. It's subtly recursive and quite lovely. 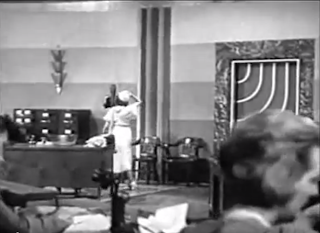 Our heroine is overwhelmed in lines

The set design is simple but beautiful. Vertical lines abound. The camera is often pulled back far enough to remind us of the vast scale of the building, a nice way to make things appear larger than they are. For a brief introspective moment, we go to an exterior atop the tower. This scene is prime Poverty Row - a simple faux-concrete wall, properly applied, represents the overwhelming height and perspective. Scene transitions are handled by pulling one scene up or down as the next rises or falls into place, each change of story in the building heralding a change of story in the plotline. And so we drift up and down the building, weaving a small Hawks-esque epic. 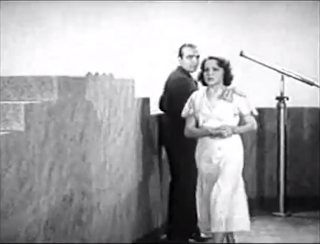 In context, this scene is pretty harrowing. So much space suggested so easily.


Behind the scenes, Remington Pictures only made two films, this one and Sleepless Nights, both 1932. I don't know what happened to them and I don't know how to find out, but I bet they were either a dummy corporation or were eaten up by another studio. 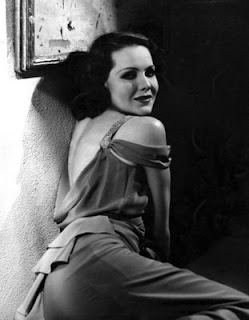 Mary Brian (and her butt)

Our film stars Mary Brian, Irene Rich, and James Hall. Mary Brian was a minor star best known for her role as the love interest in Brown of Harvard. She had just left her studio contract and was freelancing. Seems like she got a happy ending - a long career, a longterm marriage (to the editor of Rear Window!), and a star on the Walk of Fame. Manhattan Tower was just one of many in a long career. Co-star Irene Rich has two stars on the Walk of Fame - which frankly I didn't even know was possible - and rounded her career out with roles in Borzage's superlative Man's Castle, John Ford's classic Fort Apache, and a cushy role in the Ingrid Bergman bomb Joan of Arc. Both women died at the age of 96. Perhaps Manhattan Tower was some kind of good luck charm, like a reverse-Poltergeist curse?

If so, the charm didn't extend to star James Hall. Hall did alright for himself for a while there. He starred in John Ford's underrated Four Sons and Josef von Sternberg's missing The Case of Lena Smith, as well as Manhattan Tower director Frank R. Strayer's 1928 Just Married. In 1930, he had second lead in Howard Hughes' massively successful Hell's Angels, a fascinating film worth reading up on. But two short years later, his career ended with a splat. Manhattan Tower was his final film. A terrible drinking habit ended his career just as it was heating up, and cost him his life at age 39, in 1940. 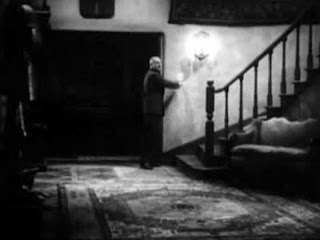 On the technical side, Director of Photography Ira H. Morgan never left the little leagues, but he did photograph some of the nicest looking products of Poverty Row - The Sin of Nora Moran, The Vampire Bat, Isle of Forgotten Sin (one of a long line of collaborations with Edgar Ulmer), Fog Island, and the original 1948 Superman serial and the 1949 Batman and Robin serial. He also shot Brown of Harvard with Mary Brian and Man to Man with James Hall - I've always wondered if such chance reunions remembered each other.

Frank R. Strayer enjoyed a long career at Columbia Pictures, directing among others 13 of the Blondie films. He seemed to take to Poverty Row to supplement his income, knocking out quickies like this, the hilarious The Vampire Bat, and the atmospheric but fun The Ghost Walks. His films are always fast and witty, the product of a very skilled workingman director.

Like much of Poverty Row's output, Manhattan Tower is on Youtube and The Internet Archive in an evidently fan-made restoration. It's one of my favorite Pre-Code films and I think y'all will get a lot out of it. It clocks in at a brisk 67 minutes.