A Look at Poverty Row, part 4: The Sin of Nora Moran 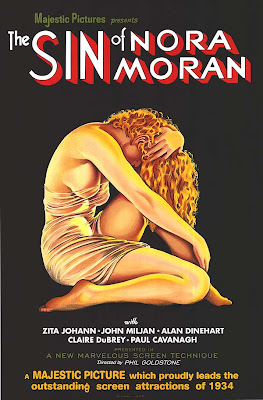 In a way, The Sin of Nora Moran is relatively well-known because of its iconic one-sheet, a poster designed by the great pin-up artist Alberto Vargas. It's a beautiful poster which has virtually nothing to do with the film it advertises (Nora Moran has black hair and, unfortunately, never dresses like that), but it works because it captures the film's sexual anguish and because its dark composition recalls the film's pivotal dream sequence: 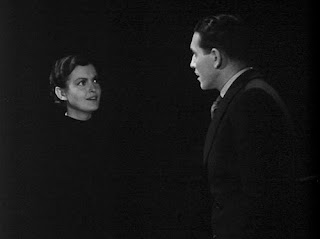 The disorienting spaceless look in the latter half is one of the film's great strengths.

Poor Nora Moran's sin is being in love, though she also has the temerity to be trusting, innocent, and a woman in a society which disdains them. Like her spiritual sister Caddy Compson, Nora Moran is an oasis of good in a wretched world - a world so ugly that even our relatively compassionate narrator describes quite unashamedly how he "groomed" his brother-in-law to "further [his] own political power." We learn in the first few minutes that Nora is the first woman sentenced to death in her state in 20 years and then, in a backwards structure that Citizen Kane would copy almost verbatim, we learn why. It's a sad and painful story, enhanced by Zita Johann's aching vulnerability. This performance is a career high. There's a moment when she paces around listening to the official charges which calls to mind Falconetti in The Passion of Joan of Arc. 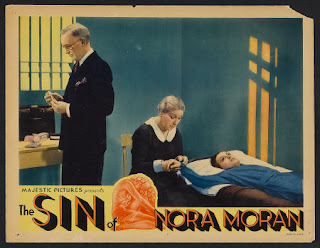 One neat thing about the film is the unspoken sisterhood - all the women, wounded by the callousness of men, seem united in mutual understanding and compassion.

It's a great performance in large measure because it's such a great script. It doesn't waste a second of its slim running time (only 65 minutes - it's basically the length of a CSI episode plus a bathroom break, so there's really no excuse to skip this one), hooking us immediately with an intriguing mystery - just what the hell was a Governor doing sending love letters to a convict? - and a measured unraveling of a sad life.


The camerawork is slick, too. Transitions in and out of flashbacks are wonderfully theatrical - faces, clocks, and fire dissolve in and out of one another, creating a paranoid and frantic mood. At one point a clock dissolves into a fire, predicting Delmore Schwartz's 1937 line "time is the fire in which we burn." This fluid approach to time is another thing Orson Welles learned from Nora Moran. 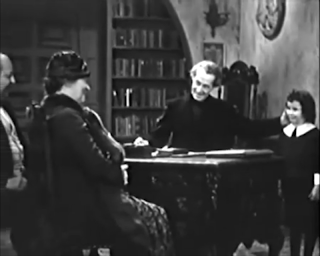 This adoption sequence was improved upon by Welles in Kane.

I'm not quite sure why this movie isn't more highly acclaimed. Pre-Code fans should enjoy its sexual atmosphere, film noir fans should take to its dark and labyrinthine structure, and Orson Welles fans should love to see all the little bits he elaborated on. The rest of the world should love it, too, because it's a captivating mystery told with class and a lovely, wounded heart.

This was one of Majestic Pictures' final films before it was absorbed into Republic in 1935. Director Phil Goldstone, who puts on such a lively and professional show here, helmed a handful of difficult-to-find silent Westerns before doing this, his first sound film. Sadly, he only directed one more film - 1937's Damaged Goods, a sleazy remake of Ulmer's VD film Damaged Lives. He's much better known as the producer of the Poverty Row classics White Zombie and The Vampire Bat. He died in '63 at the nice round age of 70.

Screenwriter W. Maxwell Goodhue never wrote another script! He has four published plays which appear to have been well-received. He died in '38 at 65, and judging from his track record I think it's safe to say his talents were never fully expressed. His co-author Frances Hyland did well for herself. Before Nora Moran, she was Universal's first female gagwriter. She also wrote The Thirteenth Guest, arguably the first slasher film. 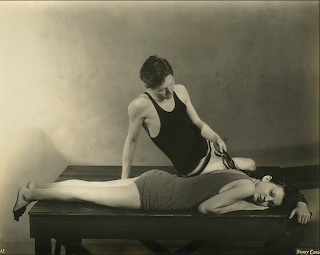 The lovely Zita Johann, who is as beautiful here as anyone has been on film, has a small but impressive résumé - she debuted as the lead in DW Griffith's final film, 1931's The Struggle. The film is a mixed bag, but she puts in great work and at times recalls Griffith's greatest find: Lillian Gish. In 1932 she starred in Howard Hawks' Tiger Shark and the essential and underrated The Mummy, in which she puts in an eerie and hypnotic performance. She's in only 8 movies and excepting her cameo in Raiders of the Living Dead (the highlight of that mess) they were all in a three year span between 1931 and 1934. In 1933, she was injured in a car accident with her then-boyfriend John Huston, mere months before Huston killed a 23 year old dancer named Tosca Roulien in a similar accident. In 1934, Zita left film for Broadway, and the state of cinema is poorer for having lost her. I believe she had it in her to stand alongside Ingrid Bergman or Joan Crawford, and The Sin of Nora Moran is my proof.

It's on the archive and it's on youtube. You can practically finish it in a lunch break. I highly recommend this one, then watch it again. Among other reasons, the opening scene of people mocking Nora's love letters takes on a whole new cruelty after her story is told. 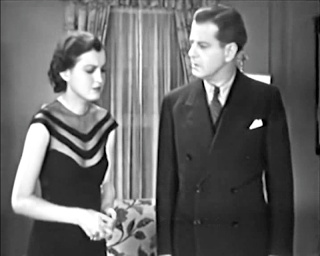 I just love this dress and couldn't squeeze it in anywhere else.
Posted by John at 9:39 PM