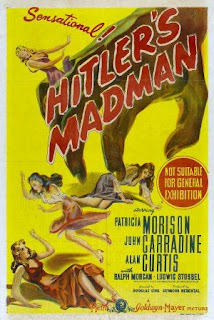 In time, Douglas Sirk would be considered one of the greatest of all filmmakers. Rainer Fassbinder, deeply indebted to the man's work, called his films "among the most beautiful all in the world." Truffaut was equally reverent, calling his Written on the Wind "the best work that has ever been done in this [genre]."

But in 1943, the man was lost. He had fled his native Germany - where he had made a splash directing several promising films - and foolishly signed a seven year contract with Columbia Pictures. They retained him as a writer, a job in which he produced virtually nothing and was paid accordingly. 46 years old, (an age by which Billy Wilder, who also fled Germany in the same exodus, had collected three Oscars), confident, and broke, Douglas Sirk took a chance and accepted a gig at the lowly PRC Studios. It was a typical wartime hiss and boo film, but it was work behind the camera so Sirk lowered his sights and took it, fearing for his reputation all the while. He recounts in Sirk on Sirk:

I was offered the picture, which was to be shot at some speed: I was given one week's shooting time. It was specifically presented to me as a very low-budget film, not even a B-feature, but a C- or D- feature. I realized that it was both a chance and a danger. It could be useful, and it might launch me. Or it could stick me as a B-feature director. And when this happens to you, no matter how good you are, you can just get stuck. Ulmer, for example, I think is a very good director, but he got stuck with B-features all his time in Hollywood.

Douglas snagged as cinematographer the great Eugen Schüfftan - one of the best in the world! The Schüfftan Process takes its name from the man, who cut his teeth with Fritz Lang on Die Nibelungen and Metropolis, Gance's Napoleon, Wilder/Ulmer/Siodmak/Zinneman's People on Sunday, and Pabst's L'Atlantide. 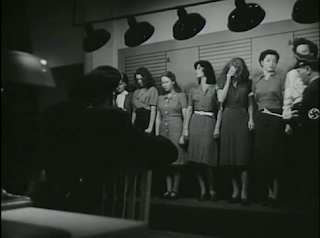 Sirk's "semi-documentary" approach is akin to the procedural crime films of the '50s.

Hitler's Madman was freshly topical. It is a biography of the recently deceased and unlamented Reinhardt Heydrich, architect of the Final Solution and one of Hitler's most despicable cohorts. He was killed in an ambush by the Czech Resistance, almost exactly one year before Hitler's Madman's June 1943 release. Sirk cast John Carradine as Heydrich, and it's very nearly the finest performance in the veteran character actor's almost comically vast career. 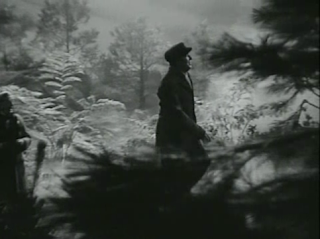 Expressive, layered sets made for like a buck eighty five.

Sirk and Schüfftan do wonders with the meager PRC sets. Sirk's camera swoops through space in the vast, soaring way Ophüls (so many umlauts) would become famous for. The story is wonderfully handled - it doesn't fall into the traps of most of these wartime films. It never falls into moralizing (years later, Sirk would declare that when you try to teach the audience, you are making a bad film), instead working as a grand and majestic tragedy. It's operatic yet small and intimate, and it builds to a powerful and painful conclusion. Truly powerful filmmaking.

Hitler's Madman was a huge success before it even made it out of the studio. MGM had caught wind of the project and Louis B. Mayer purchased it - the first film MGM released that was made by another studio. 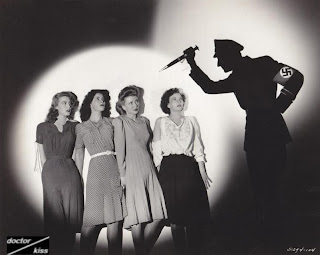 "The bit-part actress to the far left is an uncredited Ava Gardner."


Sirk - who had met Heydrich casually at UFA parties - made one more film on Poverty Row, 1944's Summer Storm. He, of course, went on to an incredible career at Universal, culminating in his grand Technicolor melodramas. A Time to Love and a Time to Die, the second-to-last of these, is a long and lush Cinemascope romance about two young Nazis whose lives are wracked by the war. It makes an interesting companion piece to Hitler's Madman - two exceptional studies of the effects of total war on citizens of both sides, told in totally contrasting styles.

Schüfftan had visa problems and couldn't be credited for his work on the film. That credit went instead to Jack Greenhalgh, a solid if unremarkable journeyman responsible for Tomorrow We Die and Strange Voyage. Don't feel too bad, though - our friend Eugen went on to shoot Eyes Without a Face, Port of Shadows, and The Hustler among others. He has a résumé of classics as long as any I'm aware of. 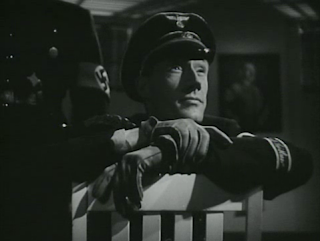 The ubiquitous John Carradine appeared in somewhere between 200 and 400 films. He appeared in at least 7 movies that year alone, and though I've never seen him give a bad performance, I've rarely seen him give one as good as his dark turn in Hitler's Madman, certainly one of his most unique and unsettling roles. Patricia Morison, who played Heydrich's most visible victim, left film for theater, where she played the lead in the original Broadway run of Kiss Me, Kate.

Because MGM snapped it up, Hitler's Madman is not available for free online like much of Poverty Row, but it is easy enough to find. It's a magnificent pseudo-debut, a great film which has been unjustly forgotten.
Posted by John at 9:08 PM